On my way from Oxford to Wendover to visit relatives for Christmas, I stopped at the Oxfam bookshop in Aylesbury. This always has an excellent SF section, crammed with books from the 50s, 60s, and 70s. I reacquainted myself with John Wyndham, and admired the way he writes as humorously and knowingly about — say — the beauty business (which he does in Trouble with Lichen and Oh, Where, Now is Peggy MacRafferty?) as he does about intangible tourists from great-granddaughter's time, triffids, and Tube trains to Hell. Admittedly, the last of these comes easily when you've done rush hour on the Northern Line.

I also found, though not in the SF section, One Minute Please, a book of essays by American humorist Robert Benchley. He is spot on about Christmas. In his essay A Good Old-Fashioned Christmas, he writes anent a visit to one's wife's folks in East Russet, Vermont:

Of course, there are the presents to be distributed, but that takes on much the same aspect as the same ceremony in the new-fashioned Christmas, except that in the really old-fashioned Christmas the presents weren't so tricky. Children got mostly mittens and shoes, with a sled thrown in sometimes for dissipation. Where a boy to-day is bored by three o'clock in the afternoon with his electric grain elevator and miniature pond with real perch in it, the old-fashioned boy was lucky if he got a copy of "Naval Battles of the War of 1812" and an orange. Now this feature is often brought up in praise of the old way of doing things. "I tell you," says Uncle Gyp, "the children in my time never got such presents as you get to-day." And he seems proud of the fact, as if there were some virtue accruing to him for it. If the children of to-day can get electric grain elevators and tin automobiles for Christmas, why aren't they that much better off than their grandfathers who got only wristlets? Learning the value of money, which seems to be the only argument of the stand-patters, doesn't hold very much water as a Christmas slogan. The value of money can be learned in just about five minutes when the time comes, but Christmas is not the season.

The book was published in 1945: I wonder what Benchley would have written about the iPads, iPods, and iPhones that Santa was toting this Christmas. 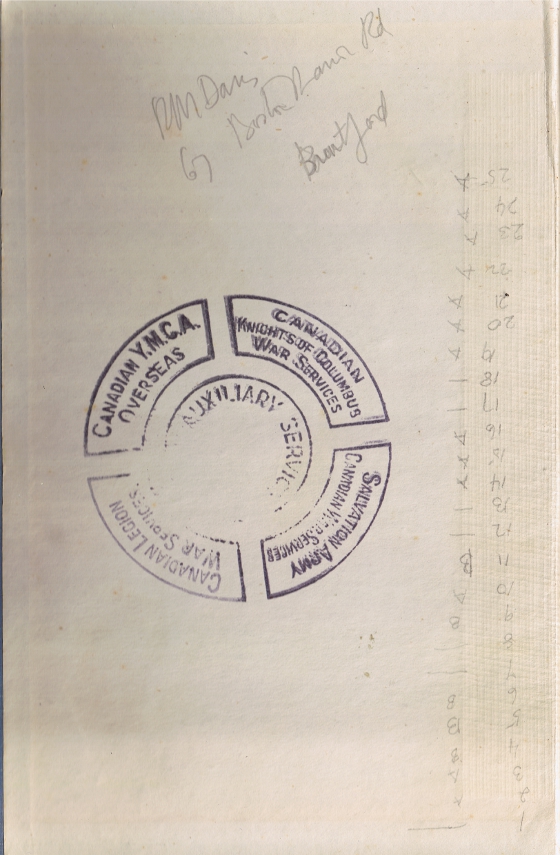 And written in pencil, upside down, is a table of the integers 1 to 25 against A's, B's, and dashes. Thus:

And that's my puzzle, to which I don't know the answer. I thought first of prime numbers, but I can't see how they'd fit. Is this a mathematical pattern at all? Is it an antique dealer's secret price code? Given the book's owners, is it code of a more serious kind? Is it sharps and flats? There is some pattern around the numbers 4 to 18; and are the A's at 2 and 3 counterparts of the pairs of dashes?