Back when Dobbs ran an Artificial Intelligence Newsletter, I wrote an article about how to program Sony's robot dog, the Aibo. Sony were kind enough to send me a CD containing two images of Aibo. I came across this yesterday, and thought you might like to see them. Here is Aibo on his own: 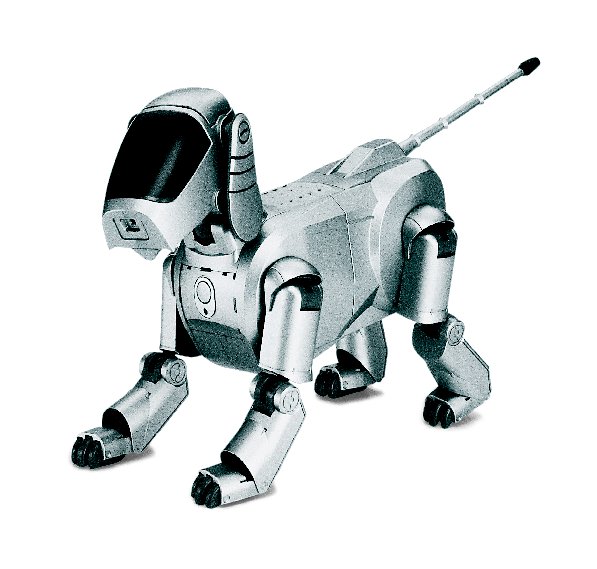 And here, cutely posed, is Aibo with a ball: 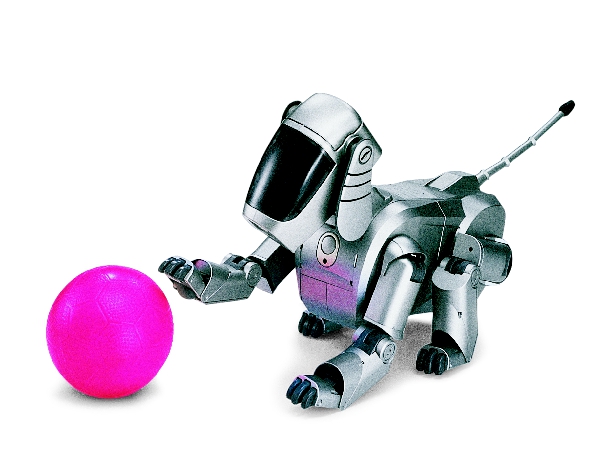 Sadly, Sony no longer make Aibo. As Charles Arthur wrote in February 2006 for the Guardian anent Why did Sony kill off its Aibo robot dog?:

Because Aibo isn't a band or a film, and it can't play or record music or films. Essentially, Sir Howard Stringer, the new boss at the Japanese multinational, is trying to focus the company on areas that will generate cash and, more importantly, profits, and the robotics unit that created Aibo, launched in 1999, was put to sleep in the process.

This is a shame, for robotics researchers as well as for well-to-do children. Aibo was on the curriculum in several robot-programming courses, and researchers had developed high-level programming tools, such as CMU's Tekkotsu, for him. I wrote about some in my article, and some are linked from RoboDB's entry for Aibo. Their development won't be entirely wasted, though: because they are designed to make robot programs portable and not dependent on details of the robot's hardware and software, they can be used with other mobile robots.

Anyway, there is (at least?) one other robot dog, Dasatech's Genibo. For a charming video of eight Genibo's dancing in synchrony, search for the heading Genibo, le remplaçant de Aibo, bientôt disponible en France in this Le Monde Numerique news listing. Toyland is a nice non-threatening environment for which to develop robot technology, where it doesn't matter if a robot doesn't perform exactly as intended: let's hope Sony is alone in ditching its robot toys.